I often get the question about Android vs iOS and which is better. The short answer is: “neither” or “both” depending on if you want the pessimistic or the optimistic version.

Here’s the breakdown of it:

I’ve been using iOS since the iPhone 1. Just before the iPhone 5 was released, I decided to give Android an honest attempt. I saw that Apple had lagged behind on a lot of features: I had replaced most of the core apps with third party apps – Chrome instead of Safari, Mailbox instead of Mail, Fantastical instead of Calendar – and don’t get me started on the Podcasts app which I seriously hope the whole team at Apple got fired for. Twice. But even though I could switch the core apps out, that didn’t help much as Apple doesn’t let me set those as default. So links from other apps still opened in Safari, though Chrome was my preferred browser. I still had to configure the Mail app with my Gmail account, even though I mostly used Mailbox or the Gmail app to read and write e-mails.

I went for a Samsung Galaxy S3. At first it was awkward, but I thought I could deal with it. Every time I encountered a glitch an Android fan would be “hey, you should download X, it fixes exactly that”. And so I spent hours on downloading apps and customizing the experience so that it would be less awkward.

Using Android instead of an iPhone  was like having driven a sports car on a smooth highway, and then driving a different sports car on a bumpy country road. I ended up going back to iOS.

This year, I decided to give Android another go as the HTC One got really good reviews. That experience was much better and I realized that I didn’t hate Android. I hate Samsung. The HTC One experience was so good that I left my iPhone 5 until recently. What drove me back wasn’t Android or iOS per se, but the fact that a majority of the quantified self devices that I’m trying out only work with iOS.

Here are the things I’ll miss with Android:

– Apps being able to interact with each other, without having to build in explicit support for every app, in each app. I can use Feedly, and from there share directly to Flipboard and Buffer without having to exit the app. On iOS, the support for sharing to Flipboard has to be coded into Feedly (which it isn’t). This means that a new great app on iOS also requires updates for apps I already use in order for them to be able to interact.

– A clean home screen. My iPhone 5 screen looks as if it’ll explode if you just add another app. It’s cluttered and it’s impossible to get the clean, minimalistic look I have on my HTC One. Which is ironic, considering Apple’s minimalistic designs. 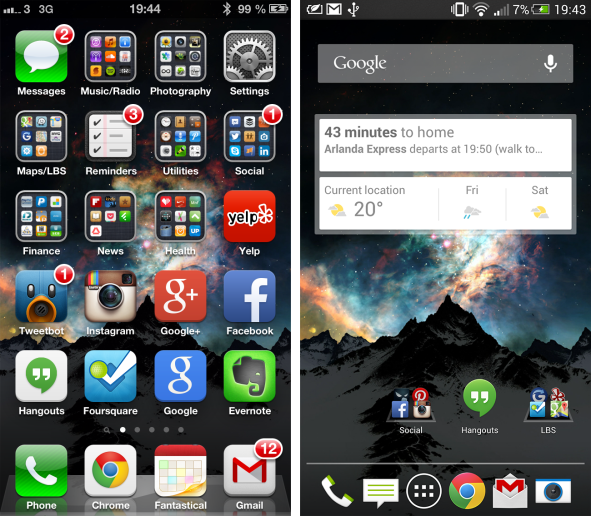 – Widgets. I loved not having to open the calendar to see my calendar, I just swiped to the screen left of my home screen. Evernote? Don’t have to open it either, the notes are right there on the third screen. To do? Second screen to the left had a full screen Remember the Milk widget with all my todos.

– Google Now. I know that this is available on iOS too, but the whole point becomes moot when you have to open an app to access it. The Google Now widget is a much better assistant than Siri because it’s proactive. I love how, when I switch on my HTC One in a new country, I immediately get the exchange rate of currency X to my own, or a couple useful phrases translated to the local language.

– Voice recognition. Google’s default voice recognition is so much better than Apple’s – especially for me who has an accent as I’m not a native English speaker. The voice control experience is so much better on Android, as it is better of recognizing context and intent. I don’t have to tell it to “search the web” or “google” – Google Now does that automatically when it needs to.

– HTC One specific (I think): being able to snap photos while filming. Great feature, but on the other hand iOS 7 and iPhone 5S will also have this.

– The universal back button. This is perhaps the single best feature in Android. Being able to go back to the previous app using that button is gold.

Things I won’t miss with Android:

– Pocket dialing. This is an HTC One specific issue, but this is the first smartphone I’ve ever had that has dialled people, move icons around on my home screen and even deleted apps from the tray while the phone has been in my pocket.

– Another HTC One specific issue is that the remote control on the headphones can’t control volume. Nor can it activate voice control. This effectively renders voice control as useless as iOS does Google Now.

– Charging time and battery life. both the Samsung Galaxy S3 and the HTC One charge a lot slower (with the original chargers) than the iPhone 5 does. You can see a comparison chart between the S3 and the iPhone here

– The constant tweaking. Having to download another launcher, a third party keyboard, a screen brightness manager and a bunch of other apps just to get the phone up to a minimum standard is simply not okay.

– Always being second or third. I felt that if someone said “The iOS app is out now, an Android app is coming soon” one more time, I’d go falling down on them. And then there’s issues like the Basis Monitor, who when releasing an Android app actually released a Samsung app.

– Stupid User Interfaces in apps. Android has got a lot of apps, and it’s got a lot of apps made by people who don’t really understand UX. They make apps for themselves, which is a very different thing. The frustration with some apps made me want to poke my finger through my eye, into my brain and swirl it around. Even apps that should be great (Evernote) aren’t. It’s not logical to have to tap a pen icon on a touch screen to edit a note. In Evernote on the iPhone it’s an intuitive tap in the note that allows you to edit it.

All in all: Android today is great. The problem isn’t Android, but clumsy third party vendors like Samsung that bloat it, or HTC that don’t think things through all the way. Had it not been for me trying out stuff like the Misfit Shine, W/Me, Heartmath HRV monitor and mostly any other Bluetooth enabled device, I’d have kept the HTC One as my main phone. Now the iPhone 5 is my primary phone and the Android is the secondary.

If you’re thinking about which phone to buy, and deciding between Android and iOS, I’d say that as long as you go for one of Google’s own smartphones like the Nexus 4 or Moto X you’ll most likely be just as happy as if you had gone for iOS. iOS constrain you more, but it also works better out of the box. Android allows you more freedom, but also requires you to tweak it more. And you’ll always be second when it comes to the great mainstream apps. But you won’t go wrong with Android.

(Unless it’s a Samsung.)

One thought on “iOS vs Android – which is better?”