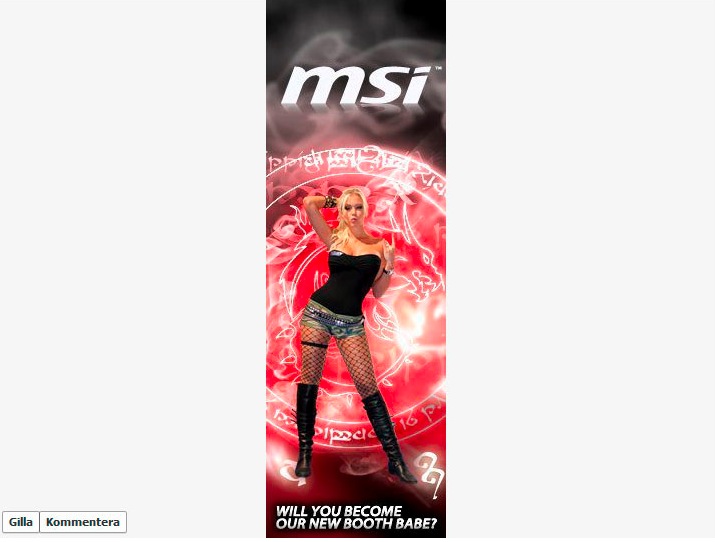 One of the biggest reasons companies are afraid of social media is fear of negativity. While the fear is real, the grounds for it are wrong. As someone once said, “social media doesn’t create negativity, it puts a magnifying glass to it”. Another reason is that marketers and managers are afraid of making mistakes. A mistake can stick with you for a long time, right?

Right, but only if you’re handling things like MSI a douche bag.

MSI Europe will be present at Dreamhack Winter 2011, the world’s largest digital festival. Dreamhack Winter 2010 had 13 608 visitors, and 12 754 computers connnected to their network. Dreamhack is about everything internet and computer related and the expo is a great place for companies who want to target geeks, gamers and gadget collectors.

Someone at MSI had the awful idea to have “booth babes”. Awful, because Sweden is one of the world’s most progressive countries when it comes to gender equality. It’s not equal, it’s just better than most other countries. A fact that in itself doesn’t say a lot considering how common gender inequality is.

The awful idea was made even more awful by hosting a competition, where girls who wanted to compete were asked to send in photos of themselves on Facebook and get the most likes. Now, you might think “but couldn’t a booth babe be a guy?”. Not according to MSI, who on their page stated that “Preference goes to girls who already reside in Scandinavia […]”.

The awful came back and bit MSI in their more intelligent parts when most of the comments both on Facebook and on their own homepage turned out to be all but supportive of the booth babe stunt. Of the 54 comments their blog post got before it was taken down, 37 were negative. Topsy.com lists a lot of reactions, few of which are neutral and even fewer positive. I’m sure most companies do not want #sexism and #fuckoffboothbabes to be related to tweets about their brand.

MSI themselves only replied to one of the comments. By posting the video to the lap dance contest with the booth babes during Dreamhack in 2010, saying “we also have man on man lapdancing”. I would have given them props for trying to handle the situation -even if it was like dousing a fire by throwing gasoline at it – if I thought this had been an attempt at salvaging the situation. I don’t think it was.

In the end, MSI picked a “winner”, but not without a tang of bitterness about the reactions (they obviously still thought that this idea was brilliant)

So where did MSI go wrong? Obviously they didn’t see the idea backfiring like this. And everyone can have a bad idea. The big mistake here  isn’t actually hosting the “booth babe” competition. Neither is the problem lack of action: MSI obviously heard the criticism and responded by deleting both the blog post on their site, and the Facebook post with all the comments. The problem is that MSI never tried to understand why people were upset, and tried to stop the conversation by deleting the content. However, the internet doesn’t forget easily. Google has a cache of MSI’s blog post, and when Google’s cache expires this screenshot will still exist. Xboxflickan.se has a screenshot of the Facebook post with all comments.

What should MSI have done instead? First of all, they should have read up on the Facebook guidelines. This competition would have been closed down by Facebook, considering the attention it got and the fact that it violates Facebook’s rules about competitions and sweepstakes.

Second, they should have listened to the criticism and responded to it. People on the internet tend to be forgiving if you acknowledge your mistakes and act to correct them. In this case a simple blog post explaining how they understand that the idea was bad, and that they chose to close down the competition. To spin this into a positive thing, I would have the team at MSI (and I dare say that it’s a team of men) that came up with the idea dress up as “booth babes” at Dreamhack.

Unfortunately, MSI will never understand what went wrong and why, if you read their comment on this fan made photo (in case the photo is taken down, here’s a screen shot – hat tip to @tesas for the tip about this).  There’s a huge opportunity for good PR for MSI’s competitors, both in digital channels and at Dreamhack.

EDIT: MSI finally issued an official apology on their Facebook page. Note that they’re not sorry for objectifying women or using booth babes – they’re sorry for introducing the contest. This can easily be understood as “we’re going to keep using booth babes”. The problem is that it’s not the competition that’s upsetting. It’s the actual thing. For those of you who don’t understand the deal with booth babes, read this explanation.

Turkey is trying to clean up their act when it comes to basic human rights in order to get into the EU. They lose a lot of credibility in this endeavor when they in the digital sphere seem to be closer to China than to EU. Jocke Jardenberg notices that Turkey is blocking Swedish streaming service Bambuser that can be used to stream video from your mobile or laptop camera.

You could argue that it’s happening in Europe as well; Sweden, for example, has a nationwide filter that is run by the police. This filter is supposedly used to block out sites containing child pornography, but has also been used to block The Pirate Bay on allegations that it contains child pornography. I’m not condoning piracy, but I find it hard to credibly criticize Turkey when we have some arbitrary blocking of information in Sweden too – and here it happens without court orders.

Having said that,  there is a difference in severity between blocking services that anyone freely can use to express their opinion, and blocking torrent search engines. Bambuser has been a part of the toolkit that helped the protesters during the Arab Spring.