Last night, I was at a community manager meetup discussing “measuring in social media”. It was a very interesting discussion that gave me the inspiration to this blog post.

The “Community Manager” role means different things for different persons. For some, a more correct title would be “Facebook Page Manager”. In other cases “Digital Communications Manager” would be more appropriate. Still others should rather be called “Support Managers”. The problem is in the title: an organization that has a “community manager” is often in this phase of social media: 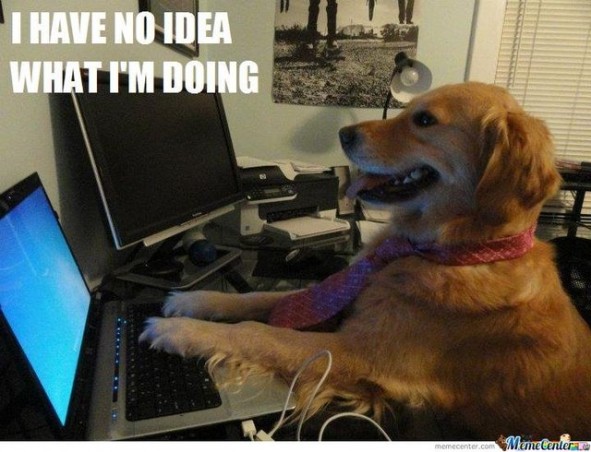 By that, I don’t mean that the people working as Community Managers are incompetent. It’s quite the opposite. These people are often very skilled at communicating in social media. They have an understanding of the tone of voice and behavior in digital channels. Most civilized persons understand the difference in interaction between people in these two scenarios …

… yet few of the managers of Community Managers can explain the difference in interaction on a Facebook Page and on Instagram.

Another risk with the Community Manager is becoming the Social Media Alibi. The person who has to handle both the Facebook Page, and the Twitter account, and shouldn’t we be on Instagram? And please tell us how to reply to that blog post that’s badmouthing our product but has the facts wrong. When the Community Manager becomes the Token Social Media Person, they also become the excuse for the rest of the organization not to learn. The role quickly starts to include not only “marketing” but also “sales”. And support, because customers who find the company’s Facebook Page will ask their questions where it’s most convenient, and who can be bothered to look up a phone number when you can post a question on Twitter?

And this brings us to yet another problem the Community Manager faces: they often end up belonging to one single department. So we have an organization that as a whole is clueless about, and awkward in, the digital landscape. It understands that it have to be a part of social media, and so the Marketing Manager hires a Community Manager as a part of the marketing team. And this is where the problems with “community managers” and “social media measuring” really start.

The successful Community Manager is a flexible person, so they take care of all the digital needs of the organization. And often in the process, they reinforce their role as Token Social Media Person. When a support question is posted on the Facebook Page, they go to the support department, find out the answer, and post it in Facebook. A question about social responsibility? No problem, the Community Manager finds out that answer too and points the peson to the right spot on the homepage. Neither support nor PR really need to get involved, and they’re relieved; they’ve got enough work as it is.

And so the Community Manager starts googling “measuring social media” to get some ideas. Because they all of a sudden have to justify their existence in an organization that hired them without really knowing exactly why.

Here’s how to fix this scenario: Before you start measuring, you need goals. And before you set goals, you need a purpose. This purpose must come from the organization, not from the Community Manager. It would be like hiring someone first, then asking them “so what do you want to do around here?” (and actually, it’s not a bad idea to put out an ad like that: Everlane did it. But you should have the answer before hiring the person).

If you have a Facebook Page, what’s the purpose of it? Is it for support? Is it brand building and campaigns? Do you want to sell products? What about feedback on products, which essentially is customer driven product development? Should you have a Twitter account? Is it for PR? To spread your blog posts? To sell? Depending on the answer to these questions, the “Community Manager” could belong to one single department, or to four different ones. And once you know the purpose of your presence in the different channels you can start creating goals. Is it a support page? Then a wave with lots of posts from “likers” isn’t necessarily a good thing (it means a lot of people are having problems). Or maybe it is a good thing, because the support department gets fewer calls. Do you want to generate sales? Then “likes” on a post mean nothing, and traffic to your e-commerce site is very important. Is it to keep in touch with loyal customers? How do you measure that in the other activities you do? Someone (unfortunately, I forgot who) in my Twitter feed today wrote a quote “A lot of people ask for the ROI of social media. Nobody asks for ROI on a client magazine.” In brand building activities you can’t always find a causation and you have to be fine with a correlation.

The feeling I have is that a lot of Community Managers caught in this dilemma are (unconsciously) trying to fill the real gap in the organization: the missing “inbound analyst”. If they’re interested enough in statistics, they will succeed. But it still won’t solve the initial problem that caused this: the organization’s lack of active and conscious choices around social media.

If you’re already stuck in this trap as a Community Manager, it can be awkward to get out of it. Because it’s hard to go back to your boss and say “Hey, what’s the purpose of our social media presence?” when you’re both pretending that you both know. But your organization’s answer to how to measure social media, to know which Facebook metrics to look at and what other figures are important fully depends on knowing the purpose of your presence.

I’m really interested in hearing your thoughts, both if you recognize this dilemma and if you think I’m completely off the track.

7 thoughts on “Measuring Social Media and the Community Manager Role”