For those who can’t read Swedish, here’s a translation:

The Swedish Transport Agency is trying to stop Uber in Stockholm! We need your help NOW!

Uber has since the start in February this year become beloved in Stockholm. Of the thirty cities around the world where Uber now exists, the growth pace has been by far the fastes in Stockholm We’re very happy and proud about this and we have you, people of Stockholm, to thank for that.

Officers of the STA identify Uber’s drivers and deny them the permit that is required for a service like Uber – which makes it impossible for us to continue in Stockholm. Why are they doing this? It’s simple. The existing taxi industry is big and strong – and the STA wants to protect it at any cost.

The STA’s explanation for this is that the permit that is required should only be given to companies that drive members of royal families or prominent business leaders. We thing that such a qualitative, safe and modern mode of transportation should be available for everyone – not just for the above mentioned!

If we don’t manage to turn this situation, the resistance we’re meeting will force us to discontinue Uber in Stockholm. That’s why we need your immediate help with convincing the authorities that limitations of modes of transportation aren’t acceptable. We who have gotten used to the authorities in Stockholm protecting innovation and new technology are both surprised and sad about what’s currently happening.

Remember: the STA’s is not acting to improve the safety or quality for consumers. They’re acting to stop innovation and protect leading taxi companies – which hurts individual drivers and risks us having to end Uber’s services in Stockholm.

Both customers and drivers have embraced Uber and it’s now up to each and everyone of us to make sure that relevant representatives of authorities understand what the effect of their acts are. We think they will listen and understand us if many Stockholmers show what they think. This is what you can do to help:

Contact the below mentioned decision makers and ask them to STOP HARASSING UBER ON THE STREETS AND APPROVE THE PERMITS IMMEDIATELY:

[list of names, e-mail addresses and phone numbers of officers and civil servants.]

The response was pretty huge. What surprised me was that people who are bright and often critical of sources jumped on the wagon without asking obvious questions:

1. What permits are being denied?

2. What has Uber done to resolve the situation?

3. What’s with the conspiracy theories?

Then there are factual errors: The STA is indeed acting to ensure that customers of transportation companies are well informed and get pricing information that’s comparable, but more on that later.

First, let’s have a look  at the taxi market in Sweden:

There are some 15 000 taxi cabs in Sweden. About 5000 of these drive in the greater Stockholm area. The market is unregulated, meaning that you can set any price for your services. On the market in Stockholm, there are three major companies: Taxi Stockholm (1650 cars), Taxi Kurir (some 2000 cars in all of Sweden) and Taxi 020 (some 1100 cars in all of Sweden). There are independent drivers (“friåkare”) who don’t belong to any central, but most drivers are connected to one of the 350 central switchboards in Sweden.

You can safely say that there’s healthy competition on the market.

You do need a permit to have a taxi service: the company needs one, and the driver needs a “taxi licence” (driver’s license where you also take tests to prove specific knowledge required of taxi drivers). You also need a taximeter which is tamper-proof, for tax purposes and for the security of customers. Every one of the taxis driving legally in Sweden fulfills these requirements. You recognize taxis that fulfill the requirements by a taxi sign on the roof, yellow license plates and a sticker displaying prices on the back door windows.

You can get an exemption from the requirement of having a taximeter. Typically, these exemptions would be given to companies that rent out limousines and similar. All of these companies use fixed prices, most commonly per time unit (for example, a Mercedes S from Crown Limo is 1200 SEK per hour, a Chrysler 300C Superstretch is 1700 SEK per hour). On a side note, anyone can use these services, not just “royal families and prominent business leaders”. This exemption also allows you to skip the taxi sign, and since they’re not driving on taximeter they don’t need yellow license plates. They don’t need the price comparison stickers either, for obvious reasons.

The key here is “chauffeur services where you pay per time unit, not for distance”. Uber is not a a chauffeur company by these standards, as they charge for distance and time, just like any other of the 5000 cabs in Stockholm. 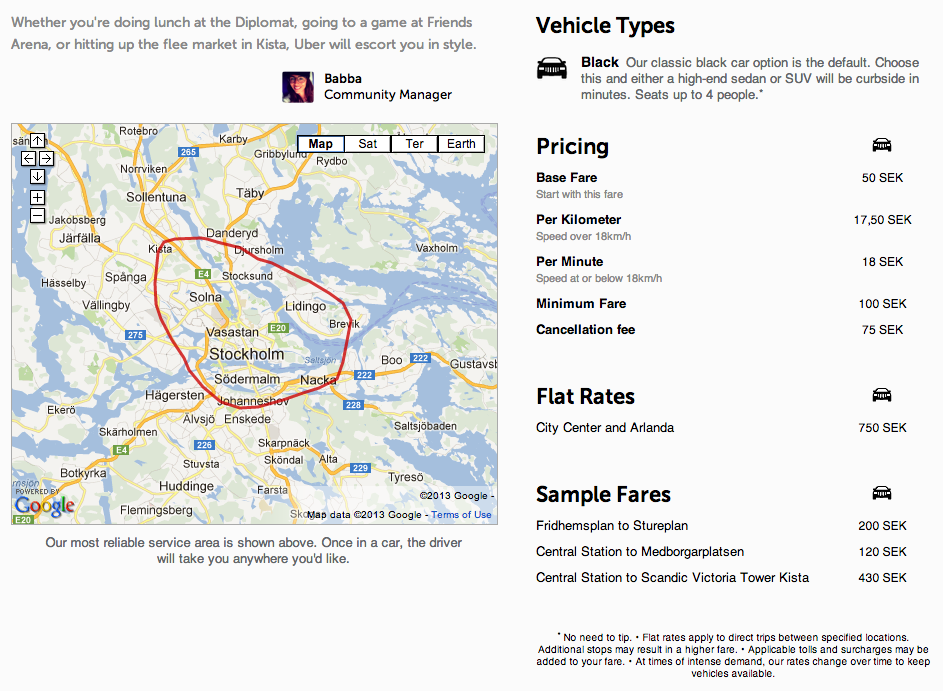 The fact is that the Swedish Transportation Authority requires taximeters and price comparison stickers for the safety of customers (and tax evasion reasons). The stickers on the cabs allow customers to be informed how this particular cab/company compares. The average comparison price for the major companies in Stockholm is around 300 SEK. So when you see a cab like this one, you know it’s more than twice as expensive as the average ride with one of the major companies. While the execution of the regulation (the information of the comparison stickers for example) can be discussed, this goes on the contrary with Uber’s claim that “STA’s is not acting to improve the safety or quality for consumers” 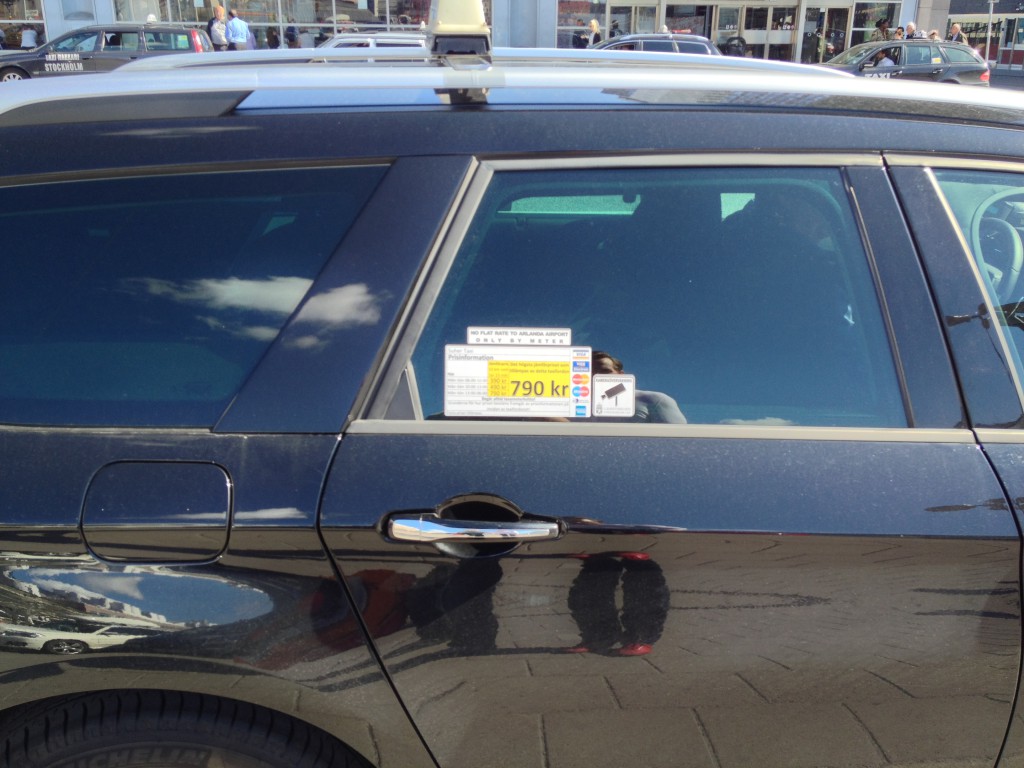 So the fact is that what Uber are currently asking for is an exemption to be able to compete on unfair grounds: they want to conduct a taxi business where price is based on distance, but they don’t want to be regulated like their competitors. If Uber for example only offered fixed prices based on time units, the exemptions wouldn’t be as problematic to get. And Uber are using an unfair comparison. They talk about “other companies getting exemption from the permits” but all these “other companies” have one thing in common: charging fixed rates. Uber don’t. And still want an exemption.

I’m also curious why Uber doesn’t offer what they’ve done to meet the regulations. Have they discussed and offered other solutions? For example, getting the app certified as a taximeter by SWEDMA, the organization that handles certifications? The Swedish authorities have been trying to get in touch with Uber, and help has been offered to navigate the issues, but Uber seem less interested in contributing to a solution and more interested in whipping their army of zombies into a frenzy with a lot of emotions and allegations, but few facts. I can only see this as Uber wanting everyone to adapt to their way, without having to budge an inch themselves.

I did speak on the phone with Travis Kalanick yesterday, who explained the situation in more detail. However, all of my questions in this blog post remain mainly unanswered. Add to that that Uber refuse to answer questions or to clarify anything in the official channels, for example the simple question “How many cars does Uber have in Stockholm?”. The answer to the latter would be relevant to judge their claims that this is “an attempt to protect the existing taxi industry”. Considering how many cars there are in Stockholm, Uber would need a fleet of at least 100 cars to make any impact on the 5000 existing cabs in Stockholm. And even then, accusing an authority in one of the countries with the lowest levels of corruption in the world is more petulant and tin foil hattery than constructive.

All in all, Uber have a lot of questions to answer. But these questions are hard, and instead they choose to use sleight of hand to shuffle cards and a throw a tantrum to raise a mob of angry zombies. I liked Uber before this, but seeing this behavior that would barely be tolerated from a petulant teenager has turned me off big time. I would be more than willing to help them to get rid of regulations that indeed are bad for both customers and companies, but so far what I can see is that they want to get rid of regulations that actually help customers.

EDIT: Uber claim being “harassed” by the police. But they are today, as far as I know, the only company in Sweden who run an organized business breaking the regulations. They have several drivers that work without the correct permits. So Uber are the only target in this case, and you don’t need a conspiracy theory to explain why police suddenly start acting against organized law breaking.

EDIT: Uber have posted what they consider a clarification (in Swedish). What they’re saying is that they refuse taximeters (or rather, that their customers do) and therefore should be given exemption. They don’t explain why they don’t simply get the app certified. So all questions are still unanswered. Also, they finally answered my question about how many cars they have in Stockholm by saying “Like all companies we have numbers we don’t give out”. All other major Swedish taxi companies state how many cars they have, so this is another strange thing.

Also relevant: Joakim Jardenberg’s blog post (in Swedish). Thanks to both Jocke and Joakim Vollert who helped with research.